How is cold brew different than hot coffee? We compare & contrast the differences & similarities of cold brew vs hot brew coffee inside…

There are many different ways to brew coffee, but the two we are talking about today are cold brew, and a hot brew, as they are the two most notable variations you'll find in just about every coffee shop.

Which is better served in the morning? If you would like to know what the differences are between cold brew vs hot brew when compared, we’ve got you covered. 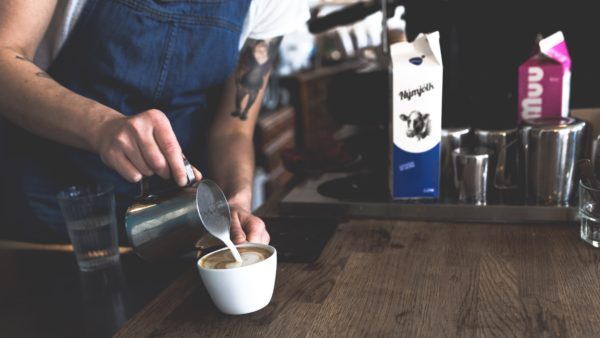 There are plenty of differences between the two when compared, including the flavors you might expect from a cup of coffee to their caffeine levels, you will likely prefer one over the other black. So what is the difference between cold brew and hot brew coffee? Let's look into that now.

The most obvious difference between traditionally prepared and cold brewed coffees are the equipment you’ll need to use in order to make it.

Hot coffee requires heat, and for that heat you'll need an electric coffee maker, a coffee grinder (if you purchase whole beans), or a kettle if you prefer more variability with your batch.

There are many brewing varieties for hot coffee, from French press to pour-over, drip to aeropress; you'll find a ton of options at varied price points depending on how in-depth you wish to be with your process. 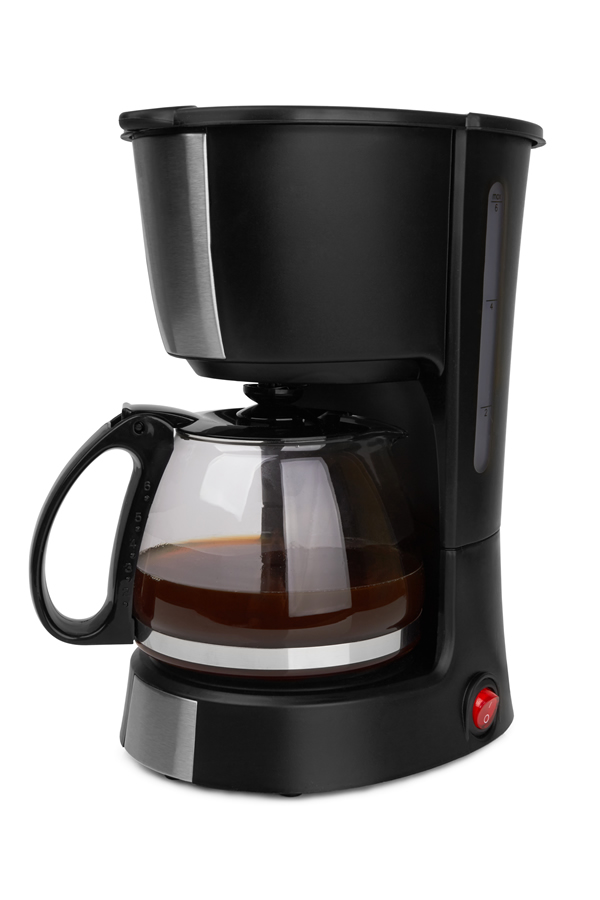 Cold brewed coffee, while similar to iced coffee is not the same.

Cold brew coffee does not require heat, so as long as you have clean cold water, a storage vessel, and time, you can make it with store-bought coffee grounds. 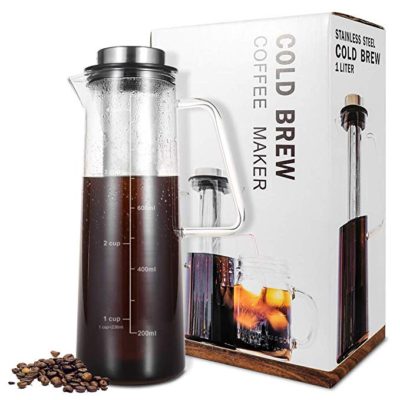 However, if you want more control over your batches, you could purchase one of a number of cold brew coffee makers that store in the fridge or on your countertop.

This will allow you to make cold brew concentrate (something that is not feasible with hot brewed coffee).

You'll also want to look into a grinder, preferably one of the conical burr varieties, as those tend to perform better than other types. 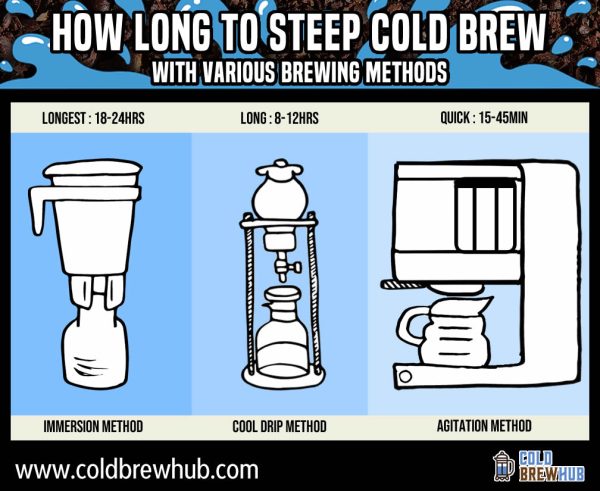 Here are some common ways to make cold brew coffee:

In most cases, people will rely on a French press for cold pressed coffee, a mason jar for cold brew immersion, or a some other system to create their own cold brew.
I've even seen really cool slow drip systems on the market as well.

No matter which you choose for your cold brew batch the important bit is simple. These machines are designed to slowly immerse grounds into cold or room temperature water for an extended period of time.

The result is usually a cold brew concentrate, so be sure to dilute it because it will be stronger than you expect otherwise.

Another large difference between the two is how they are brewed. This is also the main factor that influences the flavors that are produced by both regular and cold brew coffee.

Hot brewed coffee can be done in under 10 minutes. There’s no need to let the coffee steep for a lengthy period of time. All you have to do is to add the grounds to your coffee maker and allow hot water to pour over the grounds. In fact, the longer you immerse grounds with hot water, the harsher it will be.

Cold brew certainly requires a lot more patience than hot coffee, but it’s well worth the wait. You'll need to prepare it well in advance instead of doing it first thing in the morning because it needs to steep anywhere from 12 to 24 hours.

You’ll find that this brewing method brings out flavors you never knew existed from your favorite beans. With a combination of fruity, woody, and deep chocolatey flavor profiles, it’s one of the best ways to consume coffee. Just add cold water.

Hot-brewed coffee is known for its higher acidity, which might not be appealing to people with digestive issues. This is especially true if you frequently suffer from heartburn.

Since the heat of the water brings out more chlorogenic acid, it makes the coffee far more bitter, especially with darker roasts. 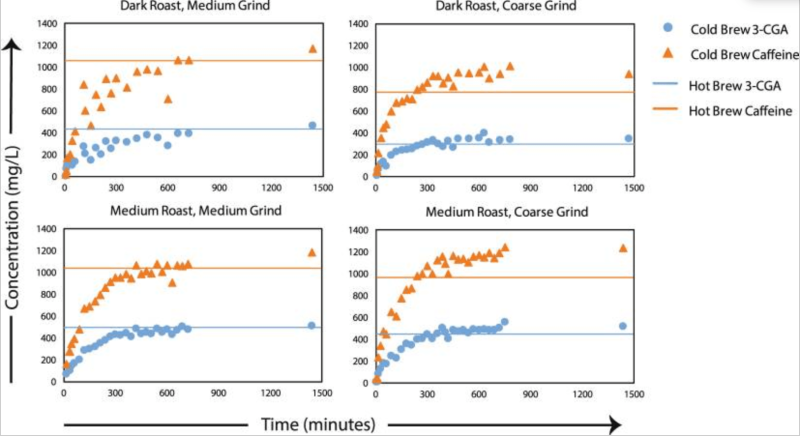 You will also notice that the longer you grounds sit in water, the higher concentration of chlorogenic acid. This is true with both methods, but the heat makes this much more problematic. Nobody likes the terrible coffee, they get from the gas station that's sat on the warmer for hours before you taste it.

Cold brew, has a smoother texture with less bite and acidity than hot. You can thank the cooler temperatures for not releasing the beans' bitter tannins, which are known to affect the coffee's bitterness.

In terms of bite, you may wonder why hot coffee tastes more bitter than cold brew coffee. This is due to a combination of degradation and oxidation of coffee solubles.

When using higher temperature water, your coffee is going to have a more sour taste, transforming chlorogenic acid into cafes and quinic acid. Plus, those darn tannins are definitely a factor in hotter varieties. 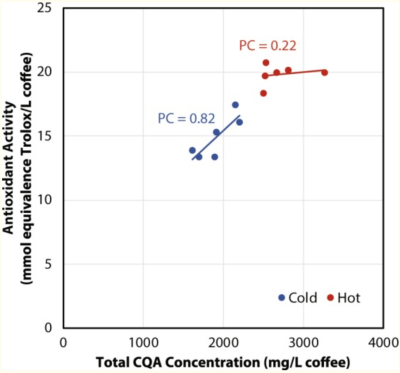 Traditional coffee features rich aromas immediately, which is what gives you the warming sensation first thing in the morning. However, these flavors quickly disappear by the time you make it to the bottom of your cup.

Cold brew coffee has a mild sweetness that helps to cut away from the bitter components of its flavor profile. You’ll also find that the acidic remnants are crisper, rather than bitter. Do yourself a favor and try it black at least once.

Many people find that there’s very little bitterness to colder brew, which paves the way for a smoother flavor. It also features a richer taste that you’re sure to enjoy, even if you’ve never had it before.

This is also what makes it so enjoyable for people who have had it for the first time. There is one thing for sure, if you prepare an iced coffee and a cold brewed coffee with ice in it and ask someone to try them both, there will be a distinct flavor difference.

Everyone knows how versatile hot coffee is, just ask any Starbucks barista and they'll rattle off a ton of menu options and add-ins enough to make your head spin! From an abundance of different flavored sweeteners to an assortment of syrups and sugars, you can create a wide array of flavored beverages. You can even add ice cubes or blend ice for different iced coffee options.

What Beans Does Starbucks Use for Cold Brew?

Did you know that cold brew gives you more options in terms of the type of coffee you can make? With cold brew, you’ll find that it’s much easier to create an iced latte without worrying about adding ice to water down the flavors of the drink.

You can freeze leftover cold brew from your batch into ice cubes and use them to cool down that hot mocha. What's more, you can heat up cold brew and use it as if it were a traditional cup without having to worry about changes in it's flavor. That's right! Hot cold brew coffee is a thing.

If you’re a little more creative, you can even make cold brew soda, which is a combination of cold brew, sugar, ice, and soda water. For an even more elevated take on coffee, you can mix it into desserts, food, or create phenomenal cocktails with your favorite spirits.

The caffeine in cold brew and hot coffee is a topic that is regularly debated among coffee enthusiasts. If you’ve had cold brew in the past, you may have noticed a higher jolt than what you would get with hot coffee.

In reality, the caffeine levels will vary depending on the type of beans you choose. There is a difference in caffeine, with cold brew offering more caffeine in fewer ounces of coffee than hotter beverages, though it’s not too much of a difference.

By the way, 3-CGA refers to chlorogenic acid concentration, which affects taste and flavor nuance, and is one of the biggest factors related to flavor in acidity. 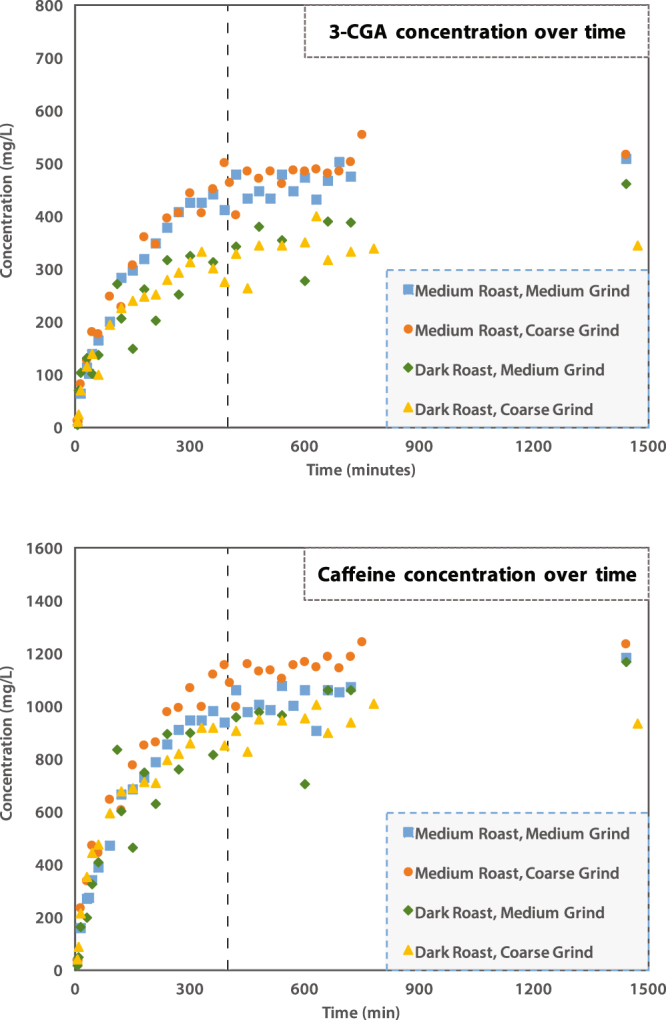 There is still much debate on the health benefits of either variety. Some argue that heat from regular brews release more antioxidants, while others suggest that cold brewed variations are better black and will promote using fewer sweeteners and additives. If you ask me, it's all good. I like my hot and cold coffee black.

As you know, cold brew requires far fewer components to make, making it the lesser expensive option. Also, with the ability to create your own DIY cold brew coffee maker, you might not have to invest in any equipment apart from filters and coffee grounds.

It’s also important to consider how the coffee makers are made. Traditional coffee makers have a lot of working parts and inner components that are prone to fail over time. This can lead to you investing in newer and upgraded coffee makers over time, hoping to achieve the perfect cup of coffee.

In comparison, cold brewing is a manual process with simple machines that anyone in the family can use. You may even find all the parts you need in your kitchen already! It seems like the answer is pretty clear in the question of which is better when discussing cold brew vs hot brew, but we'll let you be the final judge.

When debating the differences between cold brew vs hot brew, there’s a lot to think about. From flavor to caffeine content, there are several factors that go into making your perfect cup of coffee.

Let us know what differences you have found in the comments below. Be sure to subscribe to our social medias and share this with anyone who wants to know more about the coolest brewed coffee around.

Can You Heat Up Cold Brew Coffee?

Does Coffee Make You Hungry? Learn Why

How Much Potassium In Coffee? Get the Facts

How to Get Coffee Stains Out? Methods That Work